Exploring the East Side 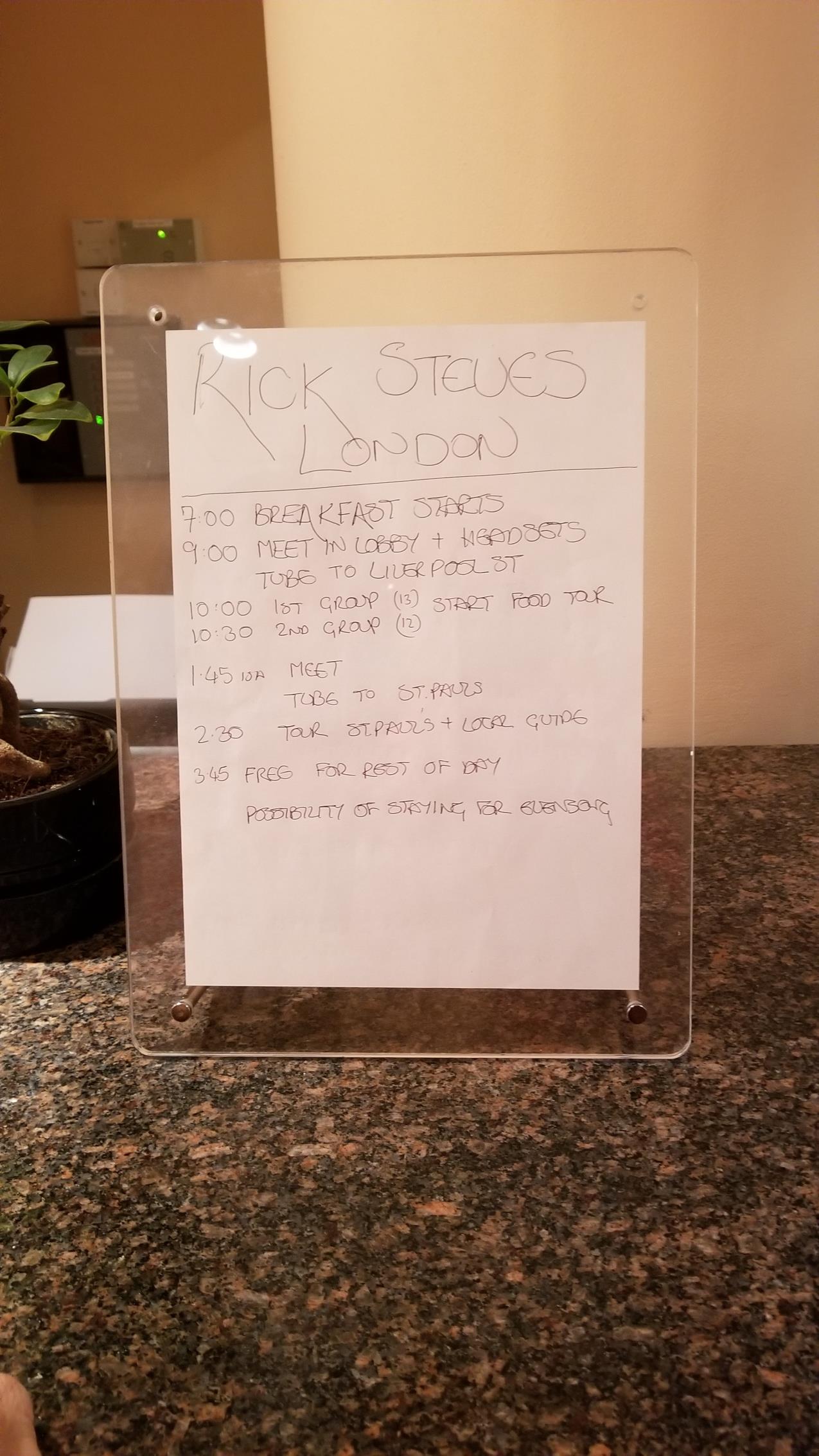 Up and out at 9:00 AM. Off to the Underground and stopping at Liverpool Station. Starting our tour at Spitalfield Market, meeting at the goat statue. 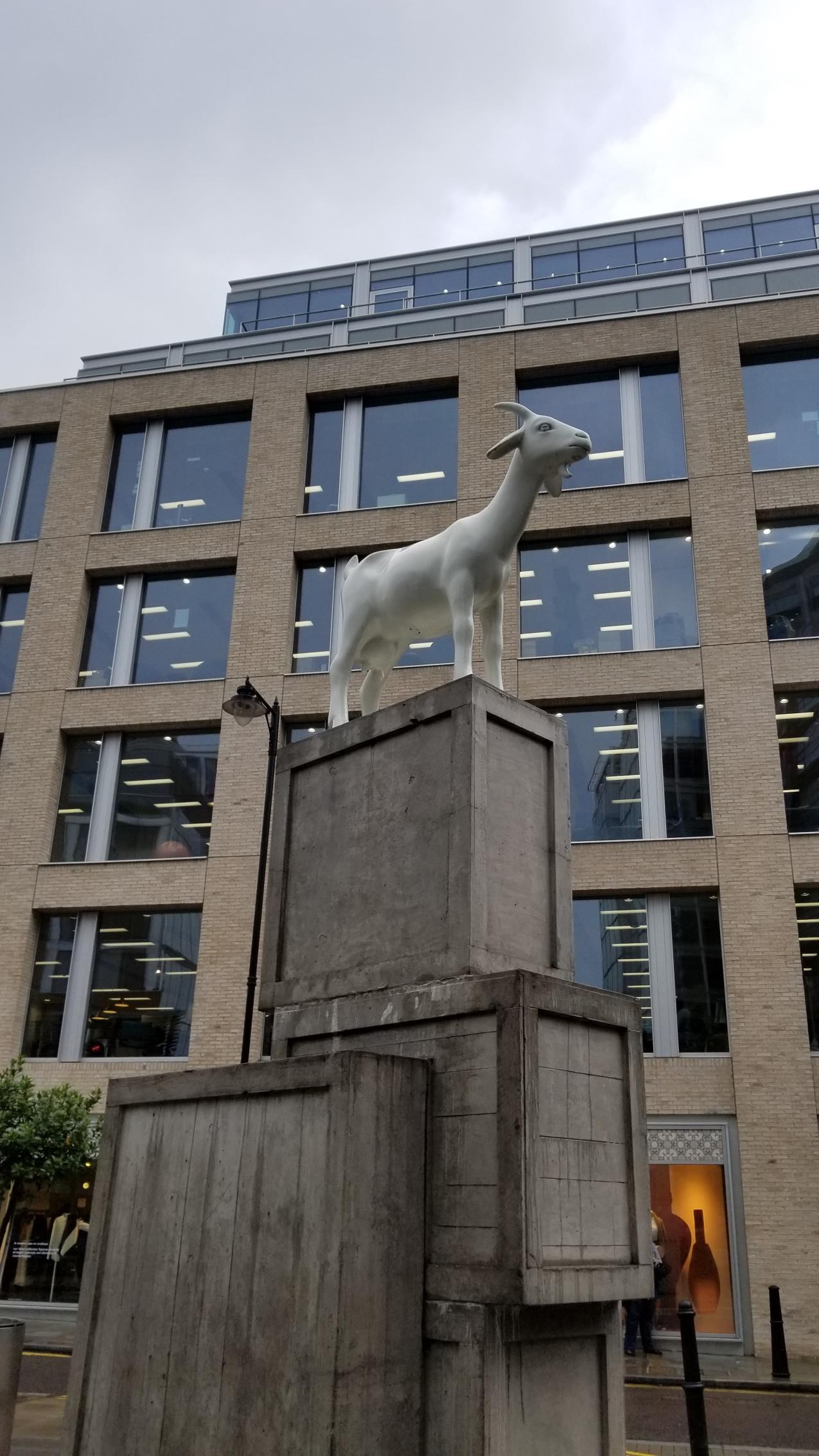 The market is very quiet at this time of the day. The street sweeper was out, cleaning up the sidewalks. It was overcast with a hint of rain in the air, but we did not get wet during our walking tour.

We will be taking a walking and eating tour of East London. Zara was our guide for this, and was wonderful. First was St. Johns for a Bacon Buttie breakfast sandwich. St. Johns makes their own ketchup, which had apple in it. Very tasty. I needed to use the toilet, which was downstairs. As I started heading down the stairs, I thought I kicked something, but it turned out it was a mouse scampering down the stairs. Our next stop was The English Restaurant for bread pudding. That was a poor man's food. It was very good, and I am not a big fan of pudding. One thing to note was that the pub used wood from an old church.

There were some really nice buildings along the walk. A pointy building, a Jewish Soup Kitchen, a homeless shelter from the early 1900's, and street art. 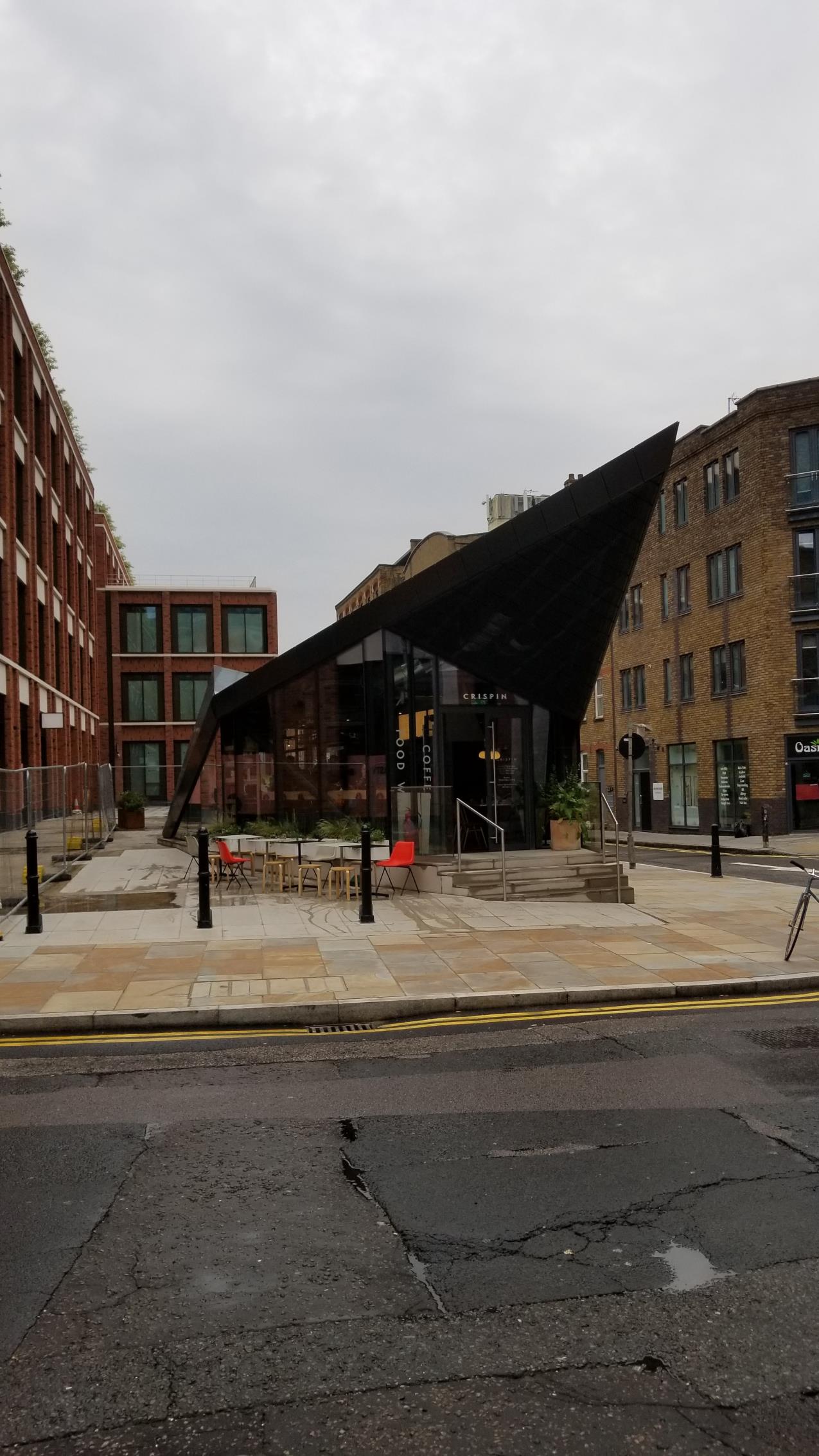 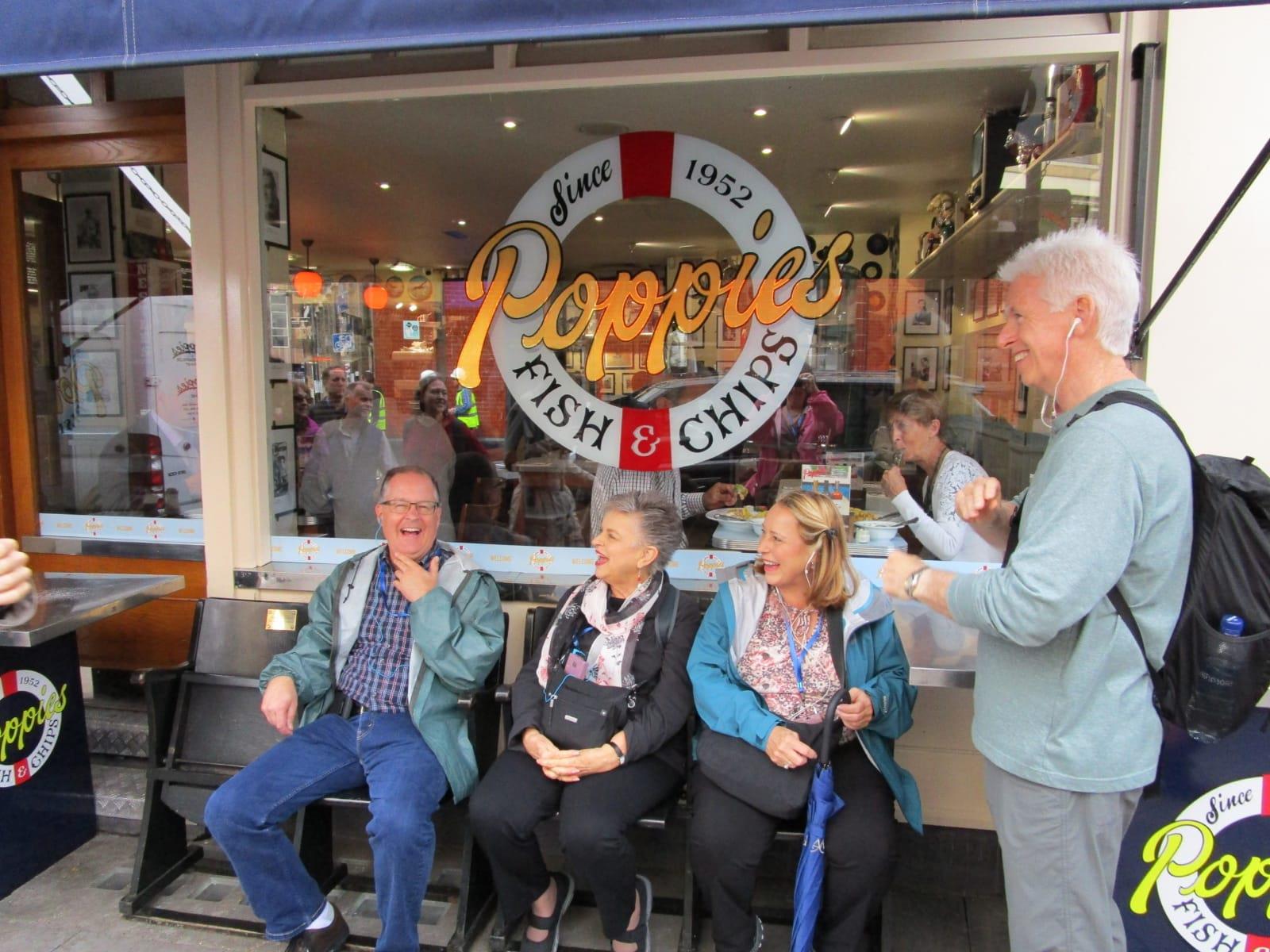 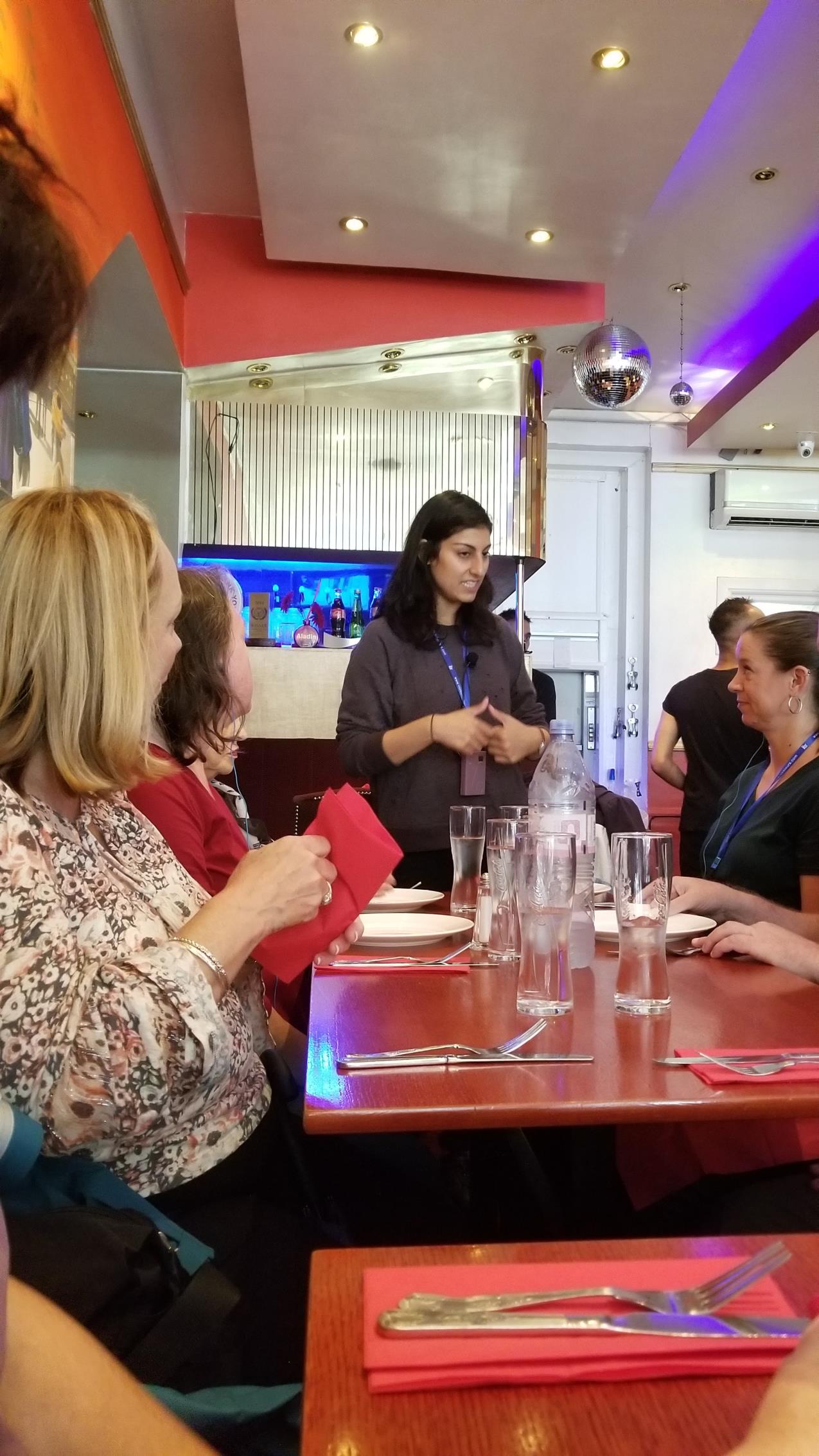 Off to Poppies for fish and chips, which has won many awards. The fish was light and not greasy, and the fries were wonderful. It was served in newspaper, which is traditional. This newsprint is food grade, so you did not have to worry about the ink rubbing off on your food. They also serve mashed peas, which were good. We continued our walk, looking at and seeing a really nice community. This is were people work and live. Then to Aladin Indian restaurant for curry. I did not try the spicy, but the vegetable and the chicken marsala were good. 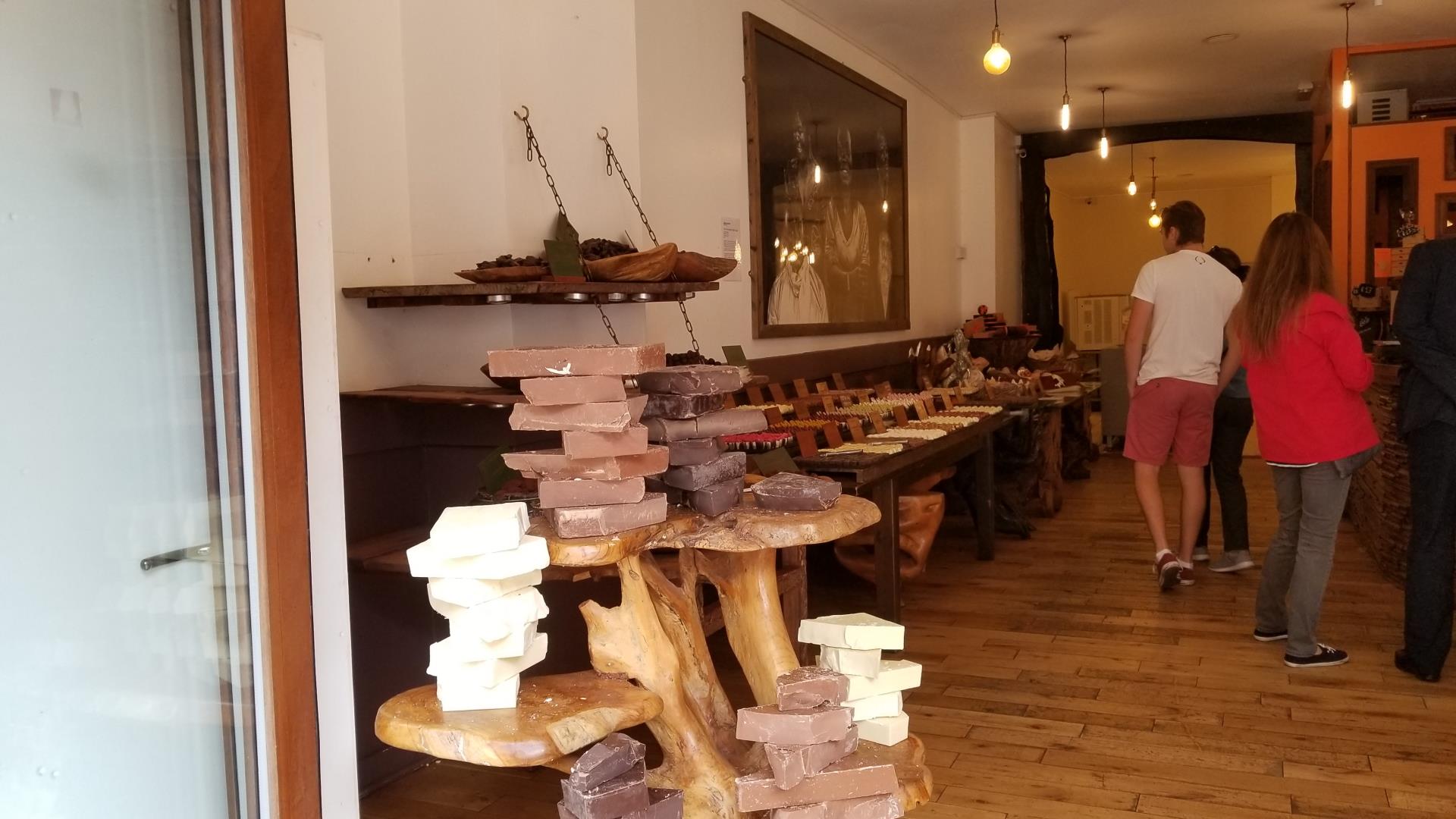 We walked by the Dark Sugars chocolate store, but did not stop! That store looked like a bit of heaven.

Next we went to St Paul's Cathedral. A very impressive building, parts plain, parts ornate because of Queen Victoria. The Duke of Wellington is buried here.

The tour was done, so we headed back to Spitalfield for the market. It closes around 5:00 pm, so most of the stalls were closing. Gwyn found some fun sunglasses. We ate at Chop’d which was a nice salad. Then headed to The Cereal Killer Cafe, which was kind of fun. You can eat cereal at any time of the day.

We realized on the way that the Dark Sugars would be right on the way, so we stopped for some delightful chocolates. I had a yummy hot chocolate, where they sliced dark and white chocolate and placed it on top of the drink, which slowly melted into it. After Dark Sugars we decided to head back to the hotel. We tried to catch a bus. We headed back to Liverpool Station, but the C bus had moved to the U stop. We found that but it was headed in the wrong direction. After some frustration, we headed back to Liverpool Station and to the Underground to go back to the hotel.

A relaxing bath made all right in the world. 21,261 steps for the day.